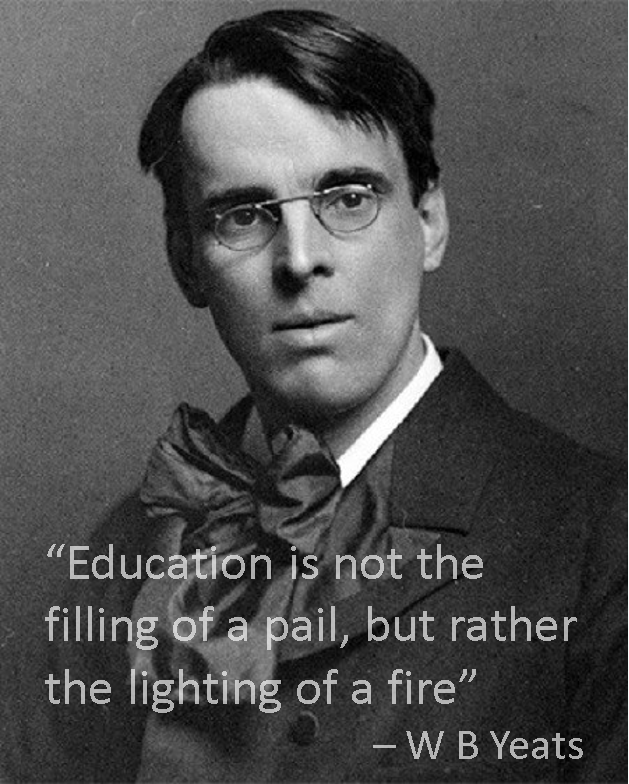 The Future of Learning

In schools throughout the English-speaking world you will often find the inspirational W.B.Yeats quote: “Education is not the filling of a pail, but the lighting of a fire”. These words appear on posters and emblazoned on coffee-mugs, proudly announcing a philosophy of education with which few could argue: the educational establishment is not in the business of indoctrination, but of liberation.

The quote presents a stark binary choice. On the one hand, the mind of the learner is a bucket to be filled, or Locke’s tabula rasa; a blank slate onto which knowledge must be inscribed. According to this view, humans in the state of nature are empty-headed, and it is only through the process of education that we are civilised and made fit for adult society and our role in the economy. According to this view, education is an inherently political process, ensuring the continuity of norms and values which protect our culture and preserve the status quo.

So much for the bucket — what of the fire? This view, which Yeats favours, has education as a self-sustaining, organic process. The curriculum is kindling, the inspirational teacher is the spark, and a lifelong passion for learning is the flame. According to this view, education is not a matter of fitting people for the roles to which they have been allotted, but rather a journey of self-discovery and actualization, whose goal is not mere gainful employment, but eudaimonia — the flourishing of human potential. Here too, education is a political act, but it’s an exciting, even revolutionary one: education as emancipation.

For decades the educational establishment has been torn between these two opposing ideas of learning. As educators we are drawn to that latter, fiery vocation, while our political masters, and the Gradgrinds of the modern economy whom they serve, constantly push us towards the mundane, pragmatic model, with its buckets to be filled over and over again, in a never-ending Sisyphean cycle.

The pendulum swings back and forth, from Grammar Schools to Comprehensives, to Grant-Maintained Schools, Foundation Schools, Academies, and then back to Grammar Schools again. With each cycle of reform the education system is nudged towards one pole or the other, towards the pail or the flame. Often the reformers promise to remove the shackles of convention, only to discover that the educational establishment has grown accustomed to its constraints and is unwilling to embrace the latest pedagogical fad. This is what happened with the Academies movement, which was initially promoted as an engine of curriculum innovation, but which ended up reproducing stripped-down curricula with no more innovation than the Foundation Schools they replaced.

At other times the educational establishment has embraced the newest trends, such as Brain-Gym or Learning-Styles, only to discover that they were based upon the flimsiest of evidence. Innovations are introduced with great fanfare, and quietly dropped within a couple of years when the trend-setters and policy-makers are distracted by the latest, shiniest pedagogical paradigm. Growth-mindset, anyone?

Will the future of learning resemble the past; a pendulum swinging back and forth between the bucket and the fire? Or are there other possibilities, orthogonal to that axis, which have yet to be fully explored? Perhaps we should be suspicious of binary choices of the sort presented by Yeats. After all, both options presuppose a transformative process in which the learner is passive — they’re either filled with knowledge or their curiosity is sparked, but either way it’s done to them by the educational system. How much autonomy does the learner really have along this axis? Perhaps we should instead be exploring the spectrum of learner-centricity. At one end of this spectrum the learner has no say in what or how she learns; at the other end she is at the the centre of her learning journey: she is in the driving-seat, so-to-speak, and can decide where to go and what route to take to get there.

How can we put learners in the driving seat? First, we must give them the tools to think for themselves, and to question the options they are presented with. The future of learning needs to be learner-centred, dissolving the distinction between the needs of society and the fulfilment of the individual, by equipping individual learners to find their place in society while also empowering them to consciously change society for the better.

When we think for ourselves, we ask difficult questions, and the answers we find can lead us to deeper insights. For example, we might ask why W.B. Yeats was talking about education in the first place. And investigating that question might lead us to a surprising discovery: there is no record of Yeats ever having uttered these words, nor are they found in any of his writings. Digging a little deeper, we might find that the quote was first associated with Yeats some fifty years after his death, and that the quote appears to be a misattribution of Plutarch, who wrote “for the correct analogy for the mind is not a vessel that needs filling, but wood that needs igniting” nearly two thousand years earlier. It’s still an inspiring quote, but the story of its attribution is just as illuminating as the models of learning which it presents.

What is learning, really? It’s more than the acquisition and retention of knowledge: otherwise memorising a shopping list would count as learning. Rather, learning is a contextual process by which we alter our models of the world and of ourselves. The power of the Yeats quote consists in its competing and intuitively compelling models of the mind. The first time you encounter this pair of metaphors they install themselves into your operating system like self-launching code. From there they can inform your understanding, not just of education, but of politics, society, and psychology. Learning is the process by which your mental operating system is updated. Learning changes us, incrementally, and in turn alters our capacity to learn more and make choices about what we learn.

In a world where unlimited information is instantly available to anyone with a smartphone, the future of learning will not be a question of filling a vessel. Nor is it enough to simply spark our curiosity. No, the future of learning consists in asking the right questions, and questioning the answers. In the end, it’s not what you know: it’s how you know.

Patrick Cootes is the Co-Founder and Chief Learning Officer of Mindstone. Before that he was a teacher and Head of Sixth Form for 18 years.